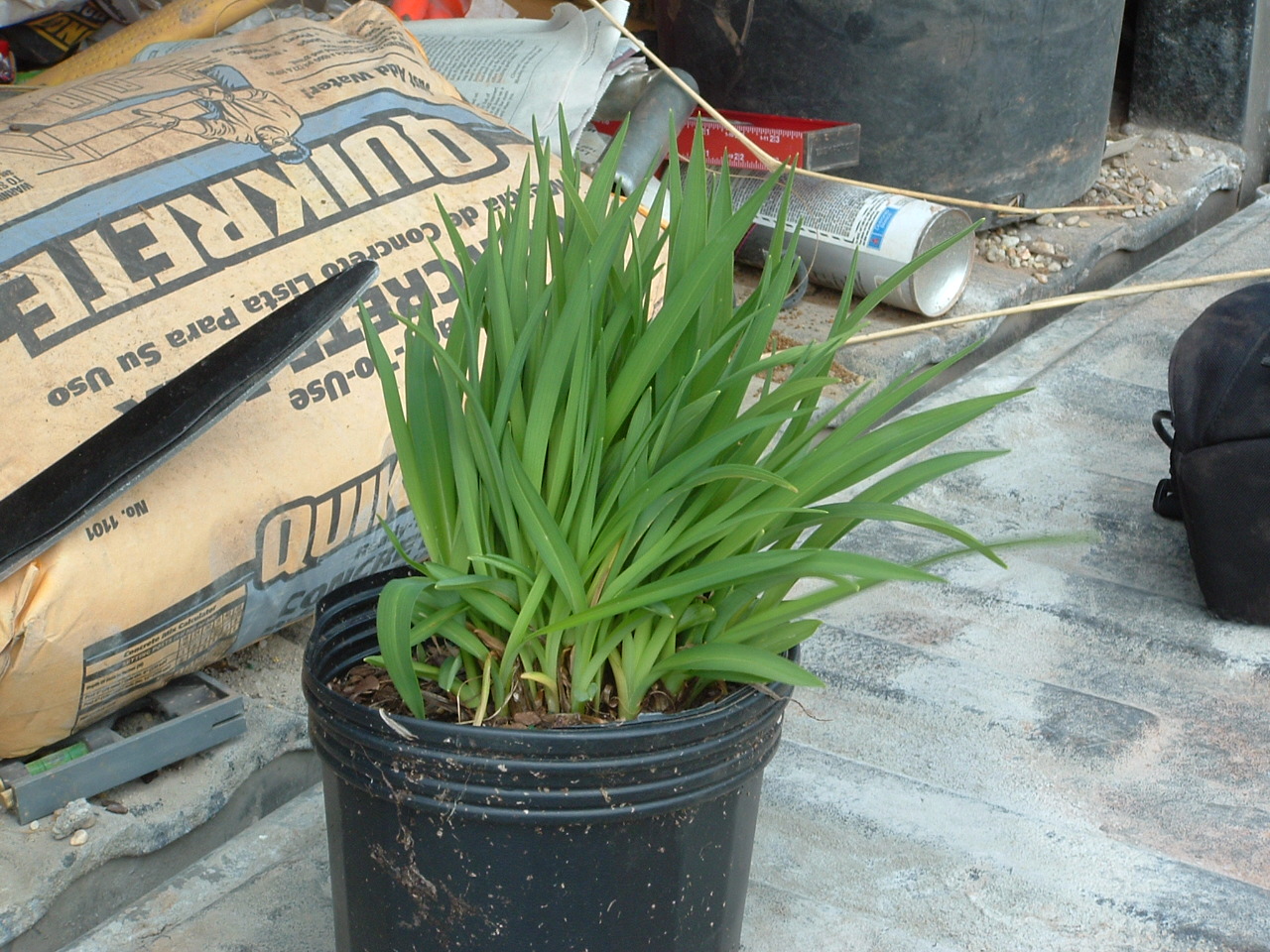 Behold, a happy little one-gallon Stella D’oro daylily (please ignore the mess behind it- it’s a work truck). I picked up this one and 29 of its friends, for a great price from a wholesale grower. It’s a really full pot, and it’ll make an instant impact on the landscape. But when I popped it out of the pot, I saw this: 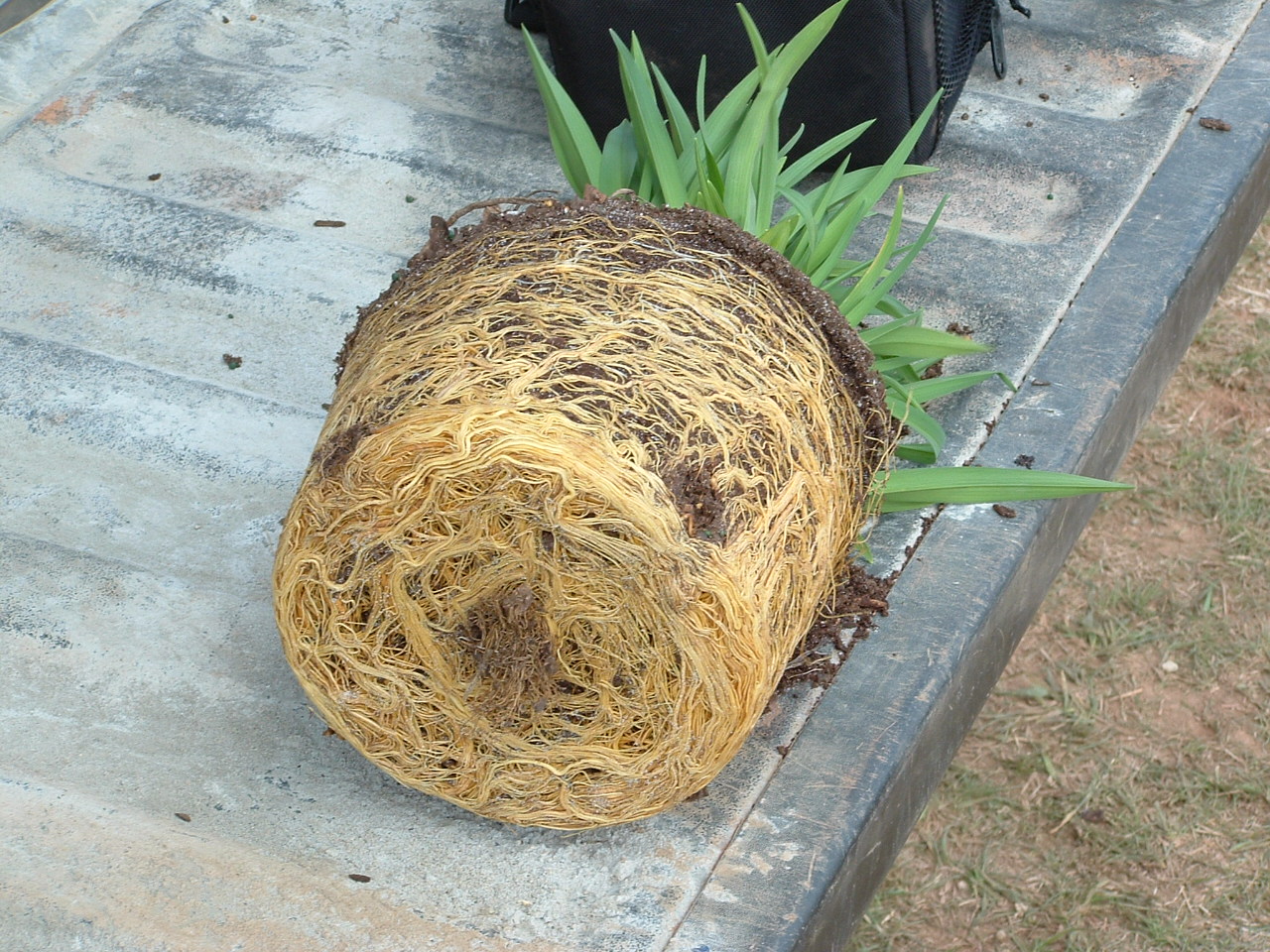 This is a great example of what people refer to when they talk about root-bound or pot-bound plants. It’s a vigorous little guy to begin with, and he’s probably spent his entire life in that pot, getting plenty of water and liquid nutrition. Plants grow roots, but they can’t grow through plastic nursery containers- the roots have to go somewhere. So, just like marathon runners on a Carnival cruise, they go in circles. This is a bad, bad thing; if I were to plant this daylily as-is, it would do fine for the first year. Eventually, however, it’s roots would continue to wrap around itself, never reaching out into the soil and eventually strangling itself. This is an even bigger problem with trees and shrubs.

How much can the roots grow like this? I’ve teased out the bottom-most roots so you can see: 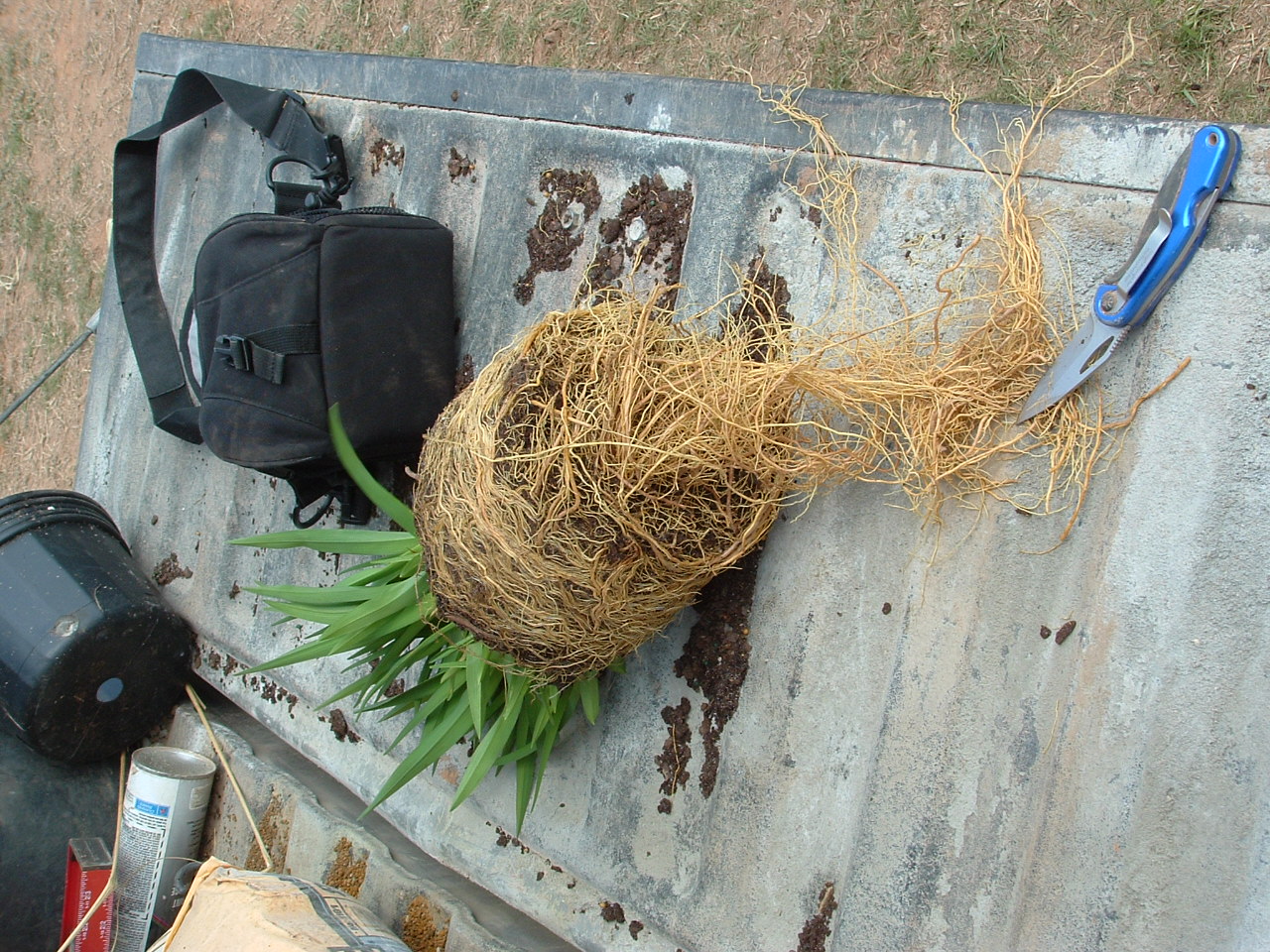 That’s pretty impressive! Those are roots that could be working their way through the soil, seeking out water and nutrients. But let me back up for a second.

I have read, in many places, that you should always inspect the roots of a plant at the nursery or garden center before you buy it. If they look like this, we’re told, put it back! Well… yes and no. If I was contemplating the purchase of an expensive ornamental evergreen, for example, I would want to start with every factor in my favor. Perennials, or inexpensive shrubs? We can fix that. You’ve probably heard to “tease” the rootbal a bit before planting, to encourage the fibrous roots to push out into the surrounding soil. With some corrective root pruning, you can also encourage a pot-bound plant to do the same.  In short, you want to cut the roots short enough that you can manipulate them to grow laterally from the root mass. I find that I have to do this, to some extent, to almost every container-grown shrub I buy. I hate sharpening my expensive Felco pruners, so I keep an inexpensive folding knife ($9.97 at Lowe’s) on my belt for this purpose. That’s been a great investment; I’ve used that same knife for the last year to root prune, as well as cut rope, burlap, and plastic nursery containers. It’s still sharp, and it’s cheap enough that I never worry when I misplace it- although I’m such a cheapskate, I will spend twenty minutes hunting it down.

I’ve often found that root-bound plants are also incredibly dried out. If I go ahead and plant them the way they are, they’ll never really absorb water the way I need them to. For this reason, I always keep a few five gallon pails in the truck. Fill the pail with water and drop the plant in for five minutes or so. When you pull it out, that root mass will be completely waterlogged, giving your plants a good jump on their water needs.

There’s a danger here, though. After an hour of pruning off these long, fibrous roots, I had the worst craving for angel hair pasta tossed with garlic and olive oil.